The roar of the cicadas reaches a deafening pitch as the late spring temperature matches summer time highs.  The boldly clad Baltimore Oriole perched at the top of a sycamore tree let’s loose a call that is answered by a female feeding young at the nest.   Lower in the tree a male orchard oriole quietly searches for insects among the leaves. 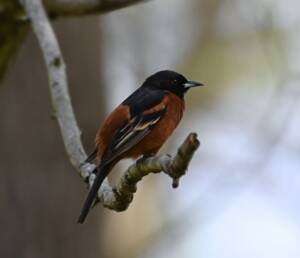 The orchard oriole, named for the habitat type it favors, is boldly colored for a bird in the blackbird family but does not hold a candle to the bold oranges of its cousin the Baltimore oriole. While the orchard and Baltimore orioles are the only two members of the Icterus genus that live in our area, worldwide there are many species and most have bold plumage.

The male orchard oriole is dark with a jet black head and back with deep red/burnt orange/chestnut breast, belly and wing patch.  They easily blend into the shadows of the forest canopy and in poor lighting can appear to be all black. The females are a yellow green color without any contrasting black on head or back. Their wings are dark with wing bars.  They are comparable to female Baltimore orioles but are distinguished by being more greenish yellow than yellow orange.   All of the orioles have long straight, heavy bills that accommodate they varied diet. 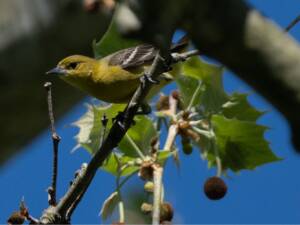 The orchard oriole can be found in open woodlands, lightly wooded stream valleys, treed parks and, as the name implies, orchards.   Nesting in late spring and early summer, this male is likely searching for insects to take back to the nest to feed the young.  At this time of year they feed almost exclusively on insects but will drink nectar from flower and even occasionally will visit hummingbird feeders. By fall and on their wintering grounds fruit will be a large part of the diet.

The male captures a large spider and flutters up to a hidden nest site within the interior of the canopy.  The nest is a loosely woven structure affixed in the crotch of two branches.    In the nest there are likely 4-6 young that were recently born waiting for a meal. They were naked and helpless when they hatched but will only spend about two weeks in the nest before they are able to fledge.  During this time the parents will feed them a steady diet of spiders, grubs, caterpillars and other insects.  The adults will coming and go from the nest quietly so to not advertise its location. 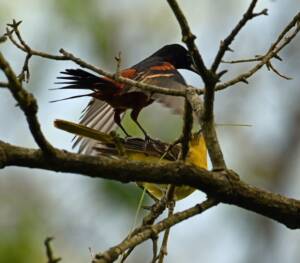 Once fledged the young will spend another week or so moving quietly and carefully within the dense canopy of the forest under the watchful eye and with continued feedings from the parents.  After this short period of nurturing and developing their own feeding skills, they will strike out on their own.  By early fall they will be heading south on their southward migration.

The male slips out of the foliage and wings across the meadow, alighting on a small tree before diving in the field to capture a grasshopper.  As he returns a passing crow catches the attention of a male eastern kingbird that is nesting in a nearby tree. The kingbird bursts out of the tree line flies directly up to the much larger bird. The kingbird harries the crow without fear, pecking and diving at the larger bird to drive it away.   The crow changes course to avoid further harassment and the kingbird slips back into the treeline.   The orchard oriole returns to the nest undaunted by the excitement.

Orchard orioles do not actively defend their nest sites but they often nest in proximity of other species, like the kingbird, that do.  This strategy allows the orioles to benefit from their neighbors aggressive defense of predators and nest parasites without having to expend their own energy in the effort.

Once fledged, the young orchard orioles will look like adult the females and will retain that plumage through the balance of the summer. When they return to Cromwell Valley next year, after over-wintering in Central and South American,  the one year old males will retain the yellow green coloring of the female but will have developed a black throat and face. It won’t be until they return for the second year that they will have developed adult male plumage. 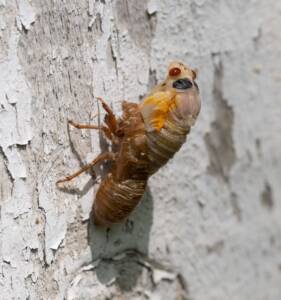 The cicada roar swells again, seeming to rise and fall with the gentle breezes that move through the valley. The orchard oriole is off again in search of prey.  The kingbird keeps and watchful eye and the bold Baltimore oriole sings again from the top of the nearby sycamore.  Just another late spring day in Cromwell Valley. 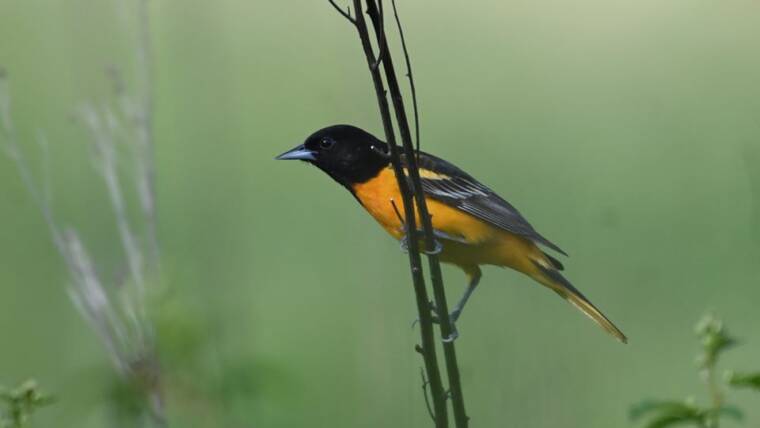